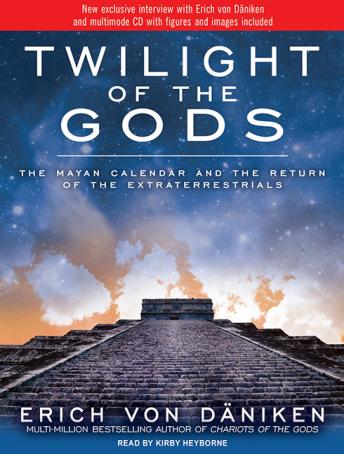 Twilight of the Gods: The Mayan Calendar and the Return of the Extraterrestrials

High up in the Bolivian Andes-4,000 meters above sea level-lies Puma punku, an ancient ruined city that simply could never have been constructed by its Stone Age inhabitants.'Something here really stinks to high heaven,' writes Erich von Daniken.

'In Twilight of the Gods,' says von Daniken, 'I document precisely what it was that left the first visitors breathless as they stood before the mighty stone blocks some 400 years ago. I will show you what archeologists discovered hundreds of years ago and demonstrate how much has been destroyed over the centuries. Intentionally.

'I will also prove that Puma punku was not built by any Stone Age people.

'And in December 2012, the gods will return from their long journey and appear again here on Earth. At least that is what the Mayan calendar would have us believe.

'But doesn't anyone with half a brain know that interstellar travel is simply impossible because of the sheer distances involved? And that extraterrestrials would never look like us?'

In his own inimitable way, Erich von Daniken picks these preconceptions and prejudices apart with a clarity no other author could manage.

Once again superb narration with the firm authority which EVD holds as true. I enjoyed the clear thinking and the many 'proofs' given in response to the objections put by so called serious thinkers, whom I would class as Ludites. A very deep and convincing book, worth reading; especially by sceptics.