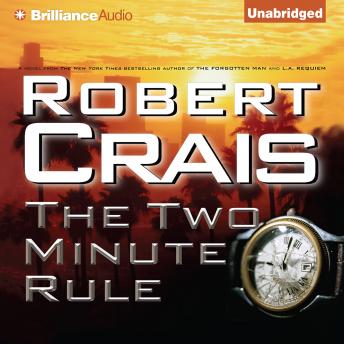 Ask anyone on the wrong side of the law about the two minute rule and they’ll tell you that’s as long as you can hope for at a robbery before the cops show up. Break the two minute rule and it’s a lifetime in jail. But not everyone plays by the rules....When ex-con Max Holman finally gets out of jail, freedom doesn’t taste too sweet. The only thing on his mind is reconciliation with his estranged son, who is, ironically, a cop. But then he hears the devastating news: His son and three other Los Angeles police officers were gunned down in cold blood the night before Holman’s release. When the hit is exposed as a revenge killing and the question of police corruption is raised, it becomes a father’s last duty to clear his son’s name and catch the killer. With all the elements that have made Robert Crais one of the very best crime novelists today, The Two Minute Rule is gripping, edgy suspense from the author who sets the standard when it comes to surprising plot twists and powerful characters.

A very good book, thoroughly enjoyable. The ending was a little weak or it would have gotten 5 stars.

The premise of this book is certainly different. An ex-con tries to track down his son's murderer. However, the "hero" is not at all likeable and gets no empathy from the listener. The son who was killed had no warm/fuzzy relationship with dad..........quite the opposite in fact. I listened to the whole thing to try and find any personable qualities about the "hero" but found none. Ok I guess but not one of the year's top ten.

I really disliked the main character. It was obvious the author wanted to make him likeable but he was still a lifelong criminal that couldn't make a good decision. And somehow it all has a happy ending with a moral that says don't follow the rules and you can get what you want. I forced myself to finish it and felt relieved to be finally done with it.

Great read. The narrator was excellent and the story kept me sitting in the car.

I am right in the middle of this book and am loving it. It keeps my interest and has me anticipating the next move. The language is very raw and real. I like the battle that Max has with himself to change his ways. He recognizes behaviours and feelings that made him want to be a criminal and is trying to reign those in and change his ways. I highly recommend this book but be aware you don't want to listen where children can hear.

I don’t envy anyone that is jailed for 10 years and is released to try and make it on their own. This is a story about a good man that found thrills in doing illegal activities, paid the price for it, and now finds the life he knew before he went to jail gone. The few remaining connected threads mean the world to him and he is determined to make it right again. There are not too many mad-cap chase scenes and just enough mystery to keep me interested. I highly recommend this book. I also enjoyed the narrator.

This title is due for release on February 21, 2006
We'll send you an email as soon as it is available!