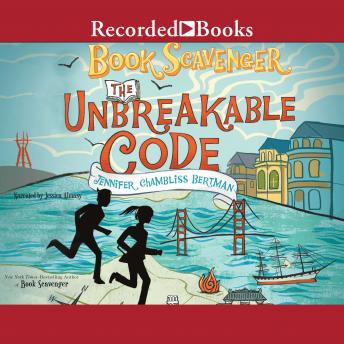 Emily and James's teacher Mr. Quisling is up to something mysterious. First, there's the news clipping with an unusual note that he drops at a book event. Then Emily and James discover their teacher has been receiving encrypted messages in a series of Mark Twain books hidden through Book Scavenger. When Emily and James decipher the messages, they begin to suspect Mr. Quisling is hunting a long-rumored treasure of buried gold. Intrigued by this prospect and what it could mean for her family's financial struggles, Emily and James set out to best their teacher. But when they research Mark Twain and the Gold Rush era, they learn about a serial arsonist from the 1800s who called himself The Lightkeeper, and the seemingly unrelated string of arson fires around San Francisco suddenly seem more ominous. Especially when they realize the fires have been set in the exact locations where Mr. Quisling found the Mark Twain books. Is a copycat Lightkeeper trying to stop Mr. Quisling? Or could Mr. Quisling himself be the arsonist? By the time Emily and James uncover the answers, much more is at stake than whether or not Emily will have to move again.

Love everything about this book. The narrator was awesome. I have thoroughly enjoyed this book series. Thanks for a great read and listen.

It is a great book