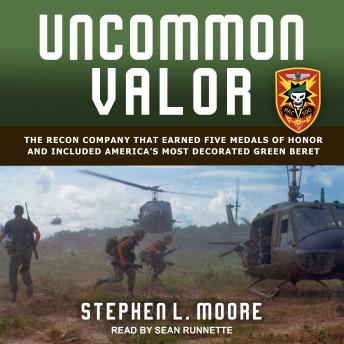 Uncommon Valor is a look into the formation and operation of an advanced Special Forces recon company during the Vietnam War.

Code-named the Studies and Observations Group, SOG was the most covert US military unit in its time and contained only volunteers from such elite units as the Army's Green Berets, Navy SEALs, and Air Force Air Commandos. SOG warriors operated in small teams, going behind enemy lines in Laos and Cambodia and along the Ho Chi Minh Trail, tasked with performing special reconnaissance, sabotaging North Vietnamese Army ammunition, attempting to rescue downed US pilots, and other black ops missions.

During that time, Forward Operating Base-2's (FOB-2's) recon company became the most highly decorated unit of the Vietnam War, with five of its men earning the Medal of Honor and eight earning the Distinguished Service Cross-America's second highest military award for valor. Purple Hearts were earned by SOG veterans at a pace unparalleled in American wars of the twentieth century, with casualties at times exceeding 100 percent. One, Bob Howard, was wounded on fourteen different occasions, received eight Purple Hearts, was written up after three different missions for the Medal of Honor, and emerged from Vietnam as the most highly decorated soldier since World War II's Audie Murphy.