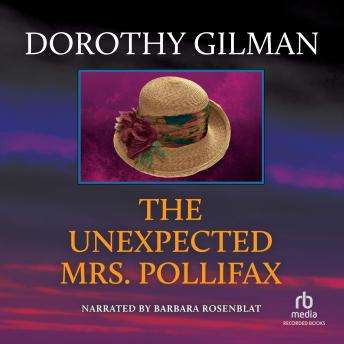 Mrs. Virgil (Emily) Pollifax of New Brunswick, New Jersey, was a widow with grown children. She was tired of attending her Garden Club meetings. She wanted to do something good for her country. So, naturally, she became a CIA agent. This time, the assignment sounds as tasty as a taco. A quick trip to Mexico City is on her agenda. Unfortunately, something goes wrong, and our dear Mrs. Pollifax finds herself embroilied in quite a hot Cold War--and her country's enemies find themsleves entangled with one unbelievably feisty lady.

Mrs Pollifax is an unlikely spy, she stumbles into it. She has none of the trade craft of Smiley's people at MI-6, or Jack Ryan. But you fall in love with her as she continues to stumble through her adventure. And she can never tell anyone what she has done. I first met Mrs Pollifax a few years ago in the library. I was so pleased to finally get to 'read' Gillman's first adventure for her.

I love this book! Brought me into the world of Mrs Pollifax! great introduction wonderful narrator of course! better than a cozy mystery but not gruesome! Great book! Great series!.

I was raised listening to this book, I've listened to it at least 10 times if not more! this book is endearing, funny, adventurous and creative. Barbara Rosenblat is CLASSIC. Highly recommend.

I absolutely LOVED this story! I will definitely be reading the rest of this series. Barbara Rosenblat did a wonderful job, as always! Mrs. Pollifax is a charming and endearing heroine!

A bit of a punt was taken on this one, the first in a 14 books long series, featuring Emily Pollifax, a bored widow of a certain age who offers her services to the CIA. On the surface it had the potential to border on farce or the ridiculous, but I found myself really enjoying this one from the mid-60s. Mrs Pollifax presents herself at Langley, volunteering service for her country and after a mix-up is assigned to collect some important documents from a bookstore in Mexico City. It's secrets from South America, but the jig is up and the opposition are trying to intercept the goods. Rather inevitably things do not go to plan and she and another American, Farrell are kidnapped and renditioned to Albania of all places. Get out of that one, Emily. Great fun from start to finish. I really liked the main character - stoic, capable, calm, experienced and ready to deal with whatever happened to her next phlegmatically. I enjoyed the direction the story took. Numerous scrapes and incidents, both in and out of captivity and an interesting cast of characters including a Chinese General, her travelling companion, her Albanian captors, a family of goat herders, a Russian agent, a British scientist, some American spy types and an over-bearing neighbour. I was reminded a bit of Lawrence Block and his adventurer-cum-agent, Evan Tanner. I was amused throughout and didn't know what was going to happen next. No real tension in the book at all, just some humorous escapades with never a dull moment. Great writing. Why has it taken me so long to discover Dorothy Gilman and Emily Pollifax? I'm looking forward to trying more from this series (already have in fact).

Excellent. both story and narrator are perfect

I adore Mrs Pollifax. All of the series is timeless. what was at written in the sixties is applicable to today. Barbara Rosenblat is one of my favorite narrators

Enjoyed listening to the adventure of this completely unlikely secret agent.

Written well, kept me engaged with the story. Main character is very likable. I like this Narrator.

l loved the book....kept me wondering what was going to happen next.

I thoroughly enjoyed this book.

Very entertaining book. I look forward to continuing listening to this series.

I thoroughly enjoyed the book and will go on to the next in the series!

This was an absolutely fantastic tale. I’m really pleased to have come across this series! John Le Carré it is not - in some respects it’s much better! Meet Mrs P, she’s a bored but still sprightly widow, with 2 adult children and grandchildren. So, she takes herself of to the CIA headquarters in Langley, to volunteer herself to them for a job as a spy! (As you do)!!! Surprisingly, she is accidentally given a simple, straightforward, boring job... it all takes off from there! This is a very engrossing tale, I devoured it in one sitting! I’m listening to this during our Pandemic Lockdown. I’m so pleased to find a series that I can indulge in from one adventure to the next.

I absolutely love these books! First I listened to them on tapes from the library, around 1999, and ever since every chance I get I pick this series. Many times I have a longing to hear the narrator and check in with Mrs Pollifax. It would have been nice to have even more books!

This title is due for release on April 22, 2011
We'll send you an email as soon as it is available!