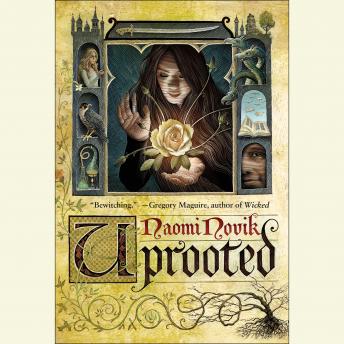 “Breathtaking . . . a tale that is both elegantly grand and earthily humble, familiar as a Grimm fairy tale yet fresh, original, and totally irresistible.”—Publishers Weekly (starred review)

ONE OF THE BEST BOOKS OF THE YEAR: NPR, BuzzFeed, Tordotcom, BookPage, Library Journal, Publishers Weekly

Agnieszka loves her valley home, her quiet village, the forests and the bright shining river. But the corrupted Wood stands on the border, full of malevolent power, and its shadow lies over her life.

Her people rely on the cold, driven wizard known only as the Dragon to keep its powers at bay. But he demands a terrible price for his help: one young woman handed over to serve him for ten years, a fate almost as terrible as falling to the Wood.

The next choosing is fast approaching, and Agnieszka is afraid. She knows—everyone knows—that the Dragon will take Kasia: beautiful, graceful, brave Kasia, all the things Agnieszka isn’t, and her dearest friend in the world. And there is no way to save her.

But Agnieszka fears the wrong things. For when the Dragon comes, it is not Kasia he will choose.

“Uprooted has leapt forward to claim the title of Best Book I’ve Read Yet This Year. . . . Moving, heartbreaking, and thoroughly satisfying, Uprooted is the fantasy novel I feel I’ve been waiting a lifetime for. Clear your schedule before picking it up, because you won’t want to put it down.”—NPR

What's to say? It's the perfect balance of real life struggles and magic. The narrator did a fantastic job bringing the main character to life. It was just wonderful.

I liked it quite a bit. It's long and a seems to get a little off track sometimes, but it all ties together in the end. I was very happy when it wasn't just a slow burn romance in a tower, and it wasn't quite what I expected.

I’ve read this book a few times already by the time I decided to listen to the audiobook while I multitask. At first, I couldn’t stand the narrator. They felt so wooden and robotic at first to the point I tried and didn’t make it past the few minute a few times. However, after awhile, the narrator grew on me. The first few minutes are rough but their voice clearly settles into a groove after maybe the first 30 minutes. It comes back every once awhile in a few lines, but overall, I feel like it suited the voice and tone of the book. I urge you listen to maybe the first 30 minutes before discounting the narration because it does become much more natural sounding.

I love this book and this author. Her work is so creative and well written that you fall into the time and setting. I have listened and read all the material she has written and have yet to be disappointed.

Great story. I feel I could've followed allot easier if the narrator hadn't been so robotic with the reading of it. It was torture to listen to but the story was so intriguing I had to finish. The other similar book by Naomi Novik is read by a WONDERFUL narrator. Highly recommend. I forget the title though.

Love the book but for those like me who feel the accent takes away from the story you should listen to the UK version narrated by Katy Sobey. That audiobook is AMAZING!

Once again, Novak has delivered an elegantly grand tale that weaves Slavick folklore with real-world concerns. Love this story, but this reader takes away from the magic. Better to read than listen to this one

Really enjoyed it I hope the writer has other books

Loved it!!!! It was one of the best books I have ever listened to! Full of joy with lots of stories to tempt you to move forward

Excellent enemy. No silly monsters or instantaneous magic. The personalities and use of spells made for an ambiance of reality even while the setting was fantasy. Yes, the narrator’s accent might have gotten in the way sometimes but I felt it was right for the story and environment. .

Loved it!!! I like the friendship that firms and the protagonist is such a joy to follow.

Loved the book, but the narrator's voice/accent is sometimes grating. Still, made for a great read.

Book would have been great with another narrator, I stopped four hours in because I could not bare the accent any longer.

Definitely loved! Creative and new. Satisfied the craving for fantasy, romance, and adventure.