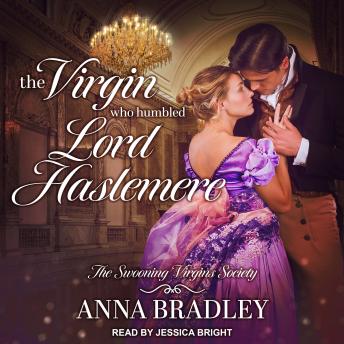 The Virgin Who Humbled Lord Haslemere

The only thing Georgiana Harley despises more than chaos is bad behavior. So when the Duchess of Kenilworth pleads for help to escape her witty, charming, handsome, heartless monster of a husband, she's come to the right place. Calm and logical, with nerves of steel, Georgiana is uniquely qualified to safely disappear the duchess, along with her young son. Her greatest challenge is Her Grace's brother, Lord Haslemere. An arrogant scoundrel, he keeps interfering with Georgiana's methodical plans. If only he would get out of her way-yet once he reveals a heart as sweet as his lips, she isn't so sure she wants him to. Can she allow herself to fall for a man with an angel's face-and a devil's reputation . . . ?

Benedict Harcourt, the Earl of Haslemere, isn't about to trust his precious sister and beloved nephew to some delicate chit who looks as if a stiff wind could send her sprawling-no matter how brilliant Georgiana is. Or beautiful. Or brave. Or lovable. Or irresistible. But does even he have the courage to fall for a young woman with the starry eyes of an innocent-and the unstoppable fierceness of a lioness? Only time, and taking a risk, will tell . . .