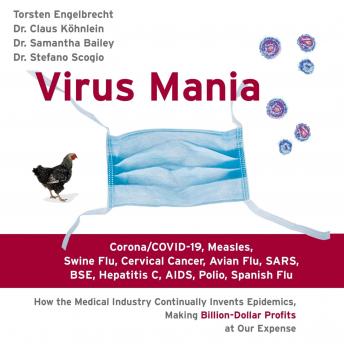 The population is terrified by reports of so-called COVID-19, measles, swine flu, SARS, BSE, AIDS or polio. However, the authors of 'Virus Mania,' investigative journalist Torsten Engelbrecht, Dr. Claus Köhnlein, MD, Dr. Samantha Bailey, MD, and Dr. Stefano Scoglio, BSc PhD, show that this fearmongering is unfounded and that virus mayhem ignores basic scientific facts: The existence, the pathogenicity and the deadly effects of these agents have never been proven.

The book 'Virus Mania' will also outline how modern medicine uses dubious indirect lab tools claiming to prove the existence of viruses such as antibody tests and the polymerase chain reaction (PCR). The alleged viruses may, in fact, also be seen as particles produced by the cells themselves as a consequence of certain stress factors such as drugs. These particles are then 'picked up' by antibody and PCR tests and mistakenly interpreted as epidemic-causing viruses.

The topic of 'Virus Mania' is of pivotal significance. Drug makers and top scientists rake in enormous sums of money and the media boosts its audience ratings and circulations with sensationalized reporting (the coverage of the 'New York Times' and 'Der Spiegel' are specifically analyzed). The enlightenment about the real causes and true necessities for prevention and cure of illnesses is falling by the wayside.

This title is due for release on April 28, 2021
We'll send you an email as soon as it is available!