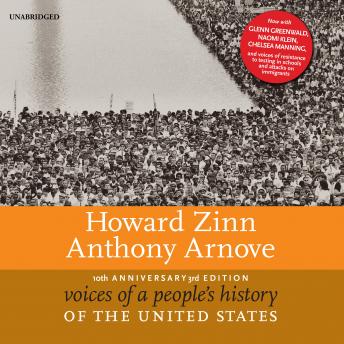 Voices of a People's History of the United States, 10th Anniversary Edition

Selected testimonies to living history-speeches, letters, poems, songs-offered by the people who make history happen, but are often left out of history books: women, workers, nonwhites. Featuring introductions to the original texts by Howard Zinn.
New voices featured in this 10th Anniversary Edition include Chelsea Manning, speaking after her thirty-five-year prison sentence; Naomi Klein, speaking from the Occupy Wall Street encampment in Liberty Square; a member of Dream Defenders, a youth organization that confronts systemic racial inequality; members of the Undocumented Youth movement, who occupied, marched, and demonstrated in support of the DREAM Act; a member of the Day Laborers movement; Chicago Teachers Union strikers; and several critics of the Obama administration, including Glenn Greenwald, on governmental secrecy.

Voices of a People's History of the United States, 10th Anniversary Edition