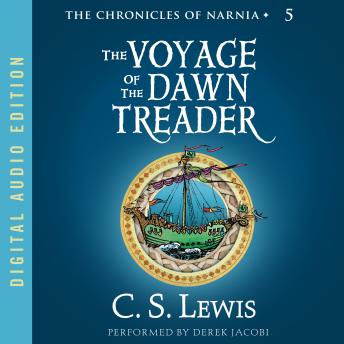 Voyage of the Dawn Treader

#5 of Chronicles of Narnia

The unabridged digital audio edition of The Voyage of the Dawn Treader, book five in the classic fantasy series, The Chronicles of Narnia, narrated by Emmy Award-winning actor Derek Jacobi.

The Dawn Treader is the first ship Narnia has seen in centuries. King Caspian has built it for his first voyage to find the seven lords, good men whom his evil uncle Miraz banished when he usurped the throne. The journey takes Edmund, Lucy, their cousin Eustace, and Caspian to the Eastern Islands, beyond the Silver Sea, toward Aslan's country at the End of the World.


The Voyage of the Dawn Treader is the fifth book in C. S. Lewis's classic fantasy series, a series that has been drawing readers of all ages into a magical land with unforgettable characters for over sixty years. This is a novel that stands on its own, but if you would like to continue to the journey, read The Silver Chair, the sixth book in The Chronicles of Narnia.

Read these books years ago and decided to listen to this one during a moment of nostalgia. CS Lewis was a master. The narrator was excellent.

My absolute favorite in the Narnia set... Best narrator ever!!!

This is my favourite book from the series. I love the adventure and all the different islands they discover. It saddens me to the end to see the adventure ending. I wish it could go on and on. The narrator is great. He does the characters well. Great book to listen too.

As with the other books in this series, they are always a fun ride. This one felt more rushed than the other books so far. The characters went place to place quickly and even though they ran into danger, it never really felt as if they were in real danger.

This title is due for release on May 24, 2005
We'll send you an email as soon as it is available!