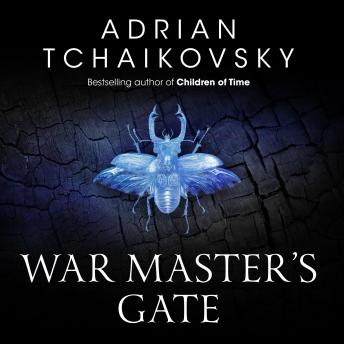 War Master’s Gate is the ninth book in the critically acclaimed epic fantasy series Shadows of the Apt by Adrian Tchaikovsky.

The Empire’s mighty imperial armies are marching on Collegium once more. They’ve learnt from past failures and this time their Empress will brook no weakness. Stenwold Maker’s aviators still dominate the skies, but their rule will soon be over. For the Empire has developed a terrifying aerial weapon to level the battlefield.

Yet victory may be decided elsewhere. In an ancient forest, where Mantis clans pursue their own civil war, Empress Seda is seeking a lost power from the old world. Cheerwell Maker knows she must stop her rival at any cost, but their conflict could awaken something far deadlier. Something that would make even their clash of nations pale into insignificance.

War Master’s Gate is followed by the tenth and final book in the Shadows of the Apt series, Seal of the Worm.

This title is due for release on November 11, 2021
We'll send you an email as soon as it is available!