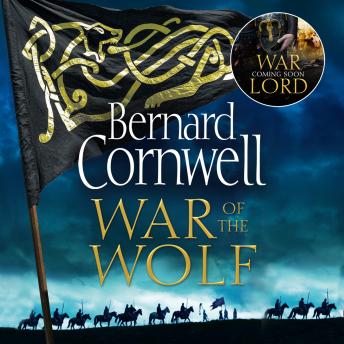 War of the Wolf

#11 of The Last Kingdom Series

The 11th book in the epic and bestselling series that has gripped millions.


A hero will be forged from this broken land.
As seen on Netflix and BBC around the world.


Lord Uhtred of Bebbanburg knows that peace is far from reach. Though he has won the battle for his ancestral home, rebellion looms in Mercia and invading Norsemen appear at every turn.

With the country in turmoil, Uhtred comes face-to-face with King Skoll, a violent Norseman leading an army of úlfheðinn, or wolf warriors, hellbent on seizing a kingdom – and killing any in his path.


Surrounded and outnumbered by new enemies, Uhtred must call on all his skill and courage to survive, and prevent his beloved Northumbria from falling to the Viking hordes.

Jonathan Keeble IS Uhtred. The series is told from an aged, battled hardened, warlord that is recounting his memories of his life and the changes that shaped & changes his world, his country, and himself. His voice is harsh, scratchy, and coarse from the years of shouting battle cries. Screaming for the men who row his battle ship to freedom from Danes and Norse that would attack, kill them, and steal any valuables they might. Jonathan Keeble IS the voice of Uthrad that is retelling his life. The other narrators simply don't have the sound, the cadence, or life experiences to be Uthred of Bebinberg

This title is due for release on October 4, 2018
We'll send you an email as soon as it is available!