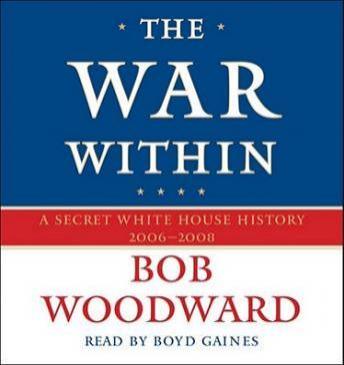 Bob Woodward once again pulls back the curtain on Washington to reveal the inner workings of a government at war in his fourth book on President George W. Bush.

The War Within provides an exhaustive account of the struggles of General David Petraeus, who takes over in Iraq during one of the bleakest and most violent periods of the war. It reveals how breakthroughs in military operations and surveillance account for much of the progress as violence in Iraq plummeted in the middle of 2007.

Woodward interviewed key players, obtained dozens of never-before-published documents, and had nearly three hours of exclusive interviews with President Bush. The result is a stunning, firsthand history of the years from mid-2006, when the White House realizes the Iraq strategy is not working, through the decision to surge another 30,000 U.S. troops in 2007, and into mid-2008, when the war becomes a fault line in the presidential election.

The War Within addresses head-on questions of leadership, not just in war but in how we are governed and the dangers of unwarranted secrecy.

This title is due for release on September 8, 2008
We'll send you an email as soon as it is available!