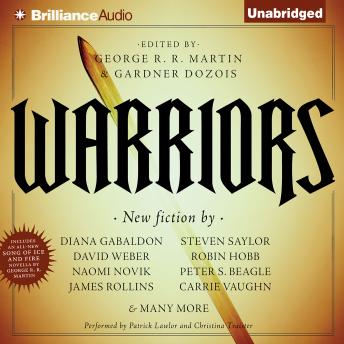 George R. R. Martin, from his introduction to Warriors:“People have been telling stories about warriors for as long as they have been telling stories. Since Homer first sang the wrath of Achilles and the ancient Sumerians set down their tales of Gilgamesh, warriors, soldiers, and fighters have fascinated us; they are a part of every culture, every literary tradition, every genre. All Quiet on the Western Front, From Here to Eternity, and The Red Badge of Courage have become part of our literary canon, taught in classrooms all around the country and the world.“Our contributors make up an all-star line-up of award-winning and bestselling writers, representing a dozen different publishers and as many genres. We asked each of them for the same thing—a story about a warrior. Some chose to write in the genre they’re best known for. Some decided to try something different. You will find warriors of every shape, size, and color in these pages, warriors from every epoch of human history, from yesterday and today and tomorrow, and from worlds that never were. Some of the stories will make you sad, some will make you laugh, and many will keep you on the edge of your seat.”Every story in this volume appears here for the first time. Included are: a long novella from the world of his Song of Ice and Fire series by George R. R. Martin, a new tale of “Lord John” by Diana Gabaldon, an “Emberverse” story by S. M. Stirling, a “Forever Peace” story by Joe Haldeman, and a long tale of humanity at bay by David Weber. Also present are original stories by David Ball, Peter S. Beagle, Lawrence Block, Gardner Dozois, Robin Hobb, Cecelia Holland, Joe R. Lansdale, David Morrell, Naomi Novik, James Rollins, Steven Saylor, Robert Silverberg, Carrie Vaughn, Howard Waldrop, and Tad Williams. Many of these writers are bestsellers. All of them are storytellers of the highest quality. Together they make a volume of unforgettable listening.

I don't normally like anthologies because I like stories with meat on them. They all did and I was left chewing on bones wanting more. Warriors included short stories from historical fiction, fantasy, science fiction and maybe more genres. I either put the book on my list back in 2013 because it was included a Dunk and Egg story or because it had a Lord John Grey short story I could find nowhere else. Both are very good reasons. I love Dunk and Egg Tales. I didn't realize until listening that Dunk and Egg must take place in the world of the Game of Thrones, which I know very little of. I am thrilled to know I was a fan before there was a TV series. Eventually, the Game of Thrones books will make it to me and I am sure I will LOVE them.