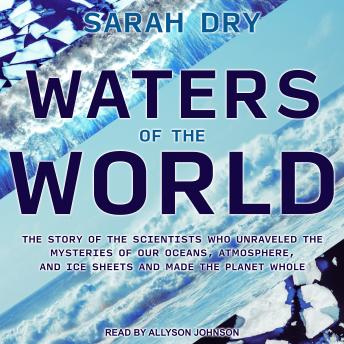 Waters of the World: The Story of the Scientists Who Unraveled the Mysteries of Our Oceans, Atmosphere, and Ice Sheets and Made the Planet Whole

From the glaciers of the Alps to the towering cumulonimbus clouds of the Caribbean and the unexpectedly chaotic flows of the North Atlantic, Waters of the World is a tour through 150 years of the history of a significant but underappreciated idea: that the Earth has a global climate system made up of interconnected parts, constantly changing on all scales of both time and space. A prerequisite for the discovery of global warming and climate change, this idea was forged by scientists studying water in its myriad forms. This is their story.

Linking the history of the planet with the lives of those who studied it, Sarah Dry follows the remarkable scientists who summited volcanic peaks to peer through an atmosphere's worth of water vapor, cored mile-thick ice sheets to uncover the Earth's ancient climate history, and flew inside storm clouds to understand how small changes in energy can produce both massive storms and the general circulation of the Earth's atmosphere. Each toiled on his or her own corner of the planetary puzzle. Gradually, their cumulative discoveries coalesced into a unified working theory of our planet's climate.

Waters of the World: The Story of the Scientists Who Unraveled the Mysteries of Our Oceans, Atmosphere, and Ice Sheets and Made the Planet Whole