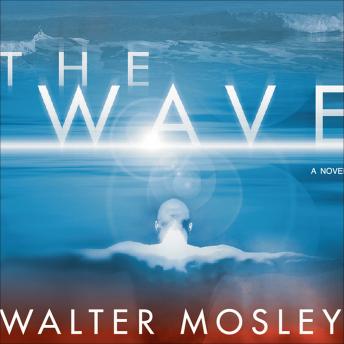 The New York Times bestselling author returns to science fiction with an eerie, transcendent novel of the near future.

Errol's father has been dead for several years. Yet lately Errol has been awakened in the middle of the night by a caller claiming to be his father. Is it a prank, or a message from the grave? When he hears the unmistakable sound of a handset being put down on a table, he decides to investigate.

Curious and not a little unnerved, Errol sneaks into the graveyard where his father is buried. What he finds there changes his life forever.

Caught up in a war between a secret government security agency and an alien presence infecting our world, touched by the Wave, he knows that nothing will ever be the same again.

The Wave is a magnificent ride! Mosley’s characters are deep but not foreboding and the storyline is enticing and memorable. The voice acting is believable without being kitschy. Bravo team -a job well done.

At first, I thought I was reading a Dean Koontz book, but by the end, I knew this was no Koontz book--it had with way too much happiness. Walter Mosley's The Wave kept glued to it so that I finished it in one day. The book has lulls, but they are short. After you've read it, there are things to ponder over. This is not a book I will forget.

This is definitely a departure from Mosley's normal shtick; I would've never though Mosley a SCI-FI writer, but he does so while not abandoning his usual deep conscience individual characters. If you're looking for EZ Rawlings, Fearless Jones, or Socrates Fortlow type character/storyline you'll be disappointed, but if you open your mind to something different from Mosley, YOU WILL ENJOY!!

I thought the author provided a provacative perspective. However, the entire underlying theme was a little "out there", even for a SCI FI fan. Still, the depth of the book and the quickness of the pace make it a good listen.

For those familiar with Walter Moseley's work, there is a consistency and familiarity to this book, which departs from his mainstream EZ Rawlins series. This is a contemporary story, whereas the Rawlins series spans the dark racially tense period of the late 50's and 60's in L.A. But the themes are familiar. In the Rawlins series, it is white man fearing the black community and it's relentless quest for justice and expression. In "The Wave", it is a black man who becomes the symbolic voice of a force of good that the white powerists fear because of a fundamental lack of intellectual objectivity and adherence to racial prejudice. As a white man, I concur completely with Mr. Moseley's vision of a perfect world where the Wave envelops all of mankind and delivers us the a much higher level of understanding.