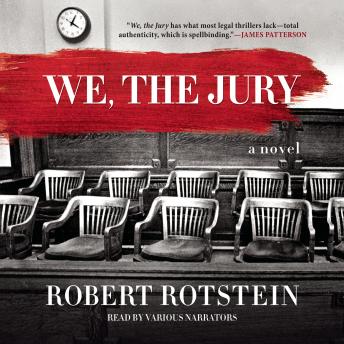 “We, the Jury has what most legal thrillers lack—total authenticity, which is spellbinding.” —James Patterson

On the day before his twenty-first wedding anniversary, David Sullinger buried an ax in his wife’s skull. Now, eight jurors must retire to the deliberation room and decide whether David committed premeditated murder—or whether he was a battered spouse who killed his wife in self-defense.

Told from the perspective of over a dozen participants in a murder trial, We, the Jury examines how public perception can mask the ghastliest nightmares. As the jurors stagger toward a verdict, they must sift through contradictory testimony from the Sullingers’ children, who disagree on which parent was Satan; sort out conflicting allegations of severe physical abuse, adultery, and incest; and overcome personal animosities and biases that threaten a fair and just verdict. Ultimately, the central figures in We, the Jury must navigate the blurred boundaries between bias and objectivity, fiction and truth.