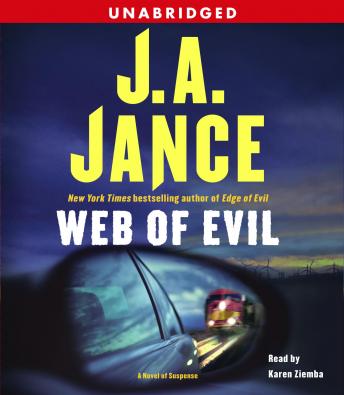 Web of Evil: A Novel of Suspense

In the second thrilling adventure of the New York Times bestselling Ali Reynolds series, Ali’s soon-to-be-ex-husband turns up dead under mysterious circumstances, and Ali soon finds herself the prime suspect at the center of a terrifying web of evil.

The highway from Los Angeles to the Palm Springs desert is parched, unforgiving, and deadly. In the suffocating stillness of a car trunk, a man—his mouth and hands bound with tape—waits to learn his fate. Fortunately for him, he’ll never know. What possible enemy could be bitter enough to commit such a heinous crime? And when will the monster make another move?

Ali Reynolds is traveling that same blistering, lonesome highway, looking forward to putting her past behind her. She’d left Los Angeles for the home comforts of Sedona, Arizona. But her cheating husband is in a hurry for a divorce; his very young and very pregnant fiancée has a wedding planned for the next day. And the television network that wrongfully dismissed Ali for the sole sin of being over forty will face her in court as well. So, Ali must return to the scene of those crimes. As she passes the site of a horrifying accident, she’s thankful it’s no longer her job to report the news. Until she finds out the news is her own: the victim is Ali’s husband, and soon she’ll find herself the prime suspect at the center of a terrifying web of evil.

Again, Jance is back to writing like her Beaumont and Brady series. She leaves you in suspense until the end. Things you did not even see coming hit you at the end. Jance is amazing!

fun, easy read. the characters and the way the parallel stories unwind and build from book to book in this series is enjoyable. the book goes by quickly and makes my commute enjoyable

I have really enjoyed this entire series. I listen to Audiobooks every day as I walk my dog, Polo, and particularly enjoy all of the various situations. Thanks J A JANCE for great reads.

Your typical J.A. Jance page turner murder mystery - a good read and very difficult to put down. Despite the fact that even cops in her books tend to do things without back up, that her very intelligent female protagonists will ignore the obvious and walk straight into danger, not to mention the fact that these stories would never happen in real life - I highly recommend this superb novel.