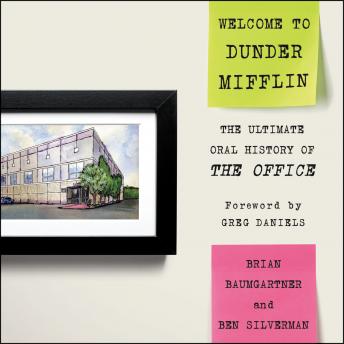 Welcome to Dunder Mifflin: The Ultimate Oral History of The Office

Join the entire Dunder Mifflin gang on a journey back to Scranton: here's the hilarious inside story of how a little show that barely survived its first season became the most watched series in the universe.

“This book is full of the memories and stories of the cast and crew and how we all found our way to each other, from everyone’s point of view. ... It’s pretty great.” —GREG DANIELS

In this definitive oral history—including the voices of the actors, writers, producers, directors, network execs, and crew—Welcome to Dunder Mifflin pulls back the curtain as never before on all the absurdity, genius, love, passion, and dumb luck that went into creating the beloved show.

Featuring a foreword by Greg Daniels, who adapted the series for the U.S. and was its guiding creative force, and narrated by star Brian Baumgartner (aka “Kevin Malone”) and executive producer Ben Silverman, here at last is the indispensable Office book.

This was a great book, an absolute must for fans of “The Office” A fascinating look at behind the scenes on the show, Q&A with cast and crew members is heartwarming and hilarious. The show was amazing and this book has provided a whole new perspective and opportunity to appreciate what an exciting journey it was creating The Office!