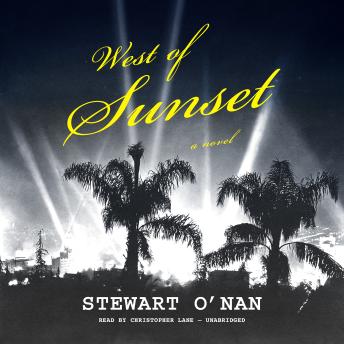 West of Sunset: A Novel

In 1937 F. Scott Fitzgerald was a troubled, uncertain manwhose literary success was long over. In poor health, with his wife consignedto a mental asylum and his finances in ruins, he struggled to make a new startas a screenwriter in Hollywood. By December of 1940, he would be dead of aheart attack.
Those last three years of Fitzgerald's life, often obscuredby the legend of his earlier Jazz Age glamour, are the focus of Stewart O'Nan'sgorgeously and gracefully written novel. With flashbacks to key moments fromFitzgerald's past, the story follows him as he arrives on the MGM lot, falls inlove with brassy gossip columnist Sheilah Graham, begins work on The LastTycoon, and tries to maintain a semblance of family life with the absentZelda and daughter Scottie.
Fitzgerald's orbit of literary fame and the golden age ofHollywood is brought vividly to life through the novel's romantic cast ofcharacters, from Dorothy Parker and Ernest Hemingway to Humphrey Bogart. Asympathetic and deeply personal portrait of a flawed man who never gave up, evenas his every wish and hope seemed thwarted, West of Sunset confirmsO'Nan as "possibly our best working novelist" (Salon).

West of Sunset: A Novel

This title is due for release on January 13, 2015
We'll send you an email as soon as it is available!