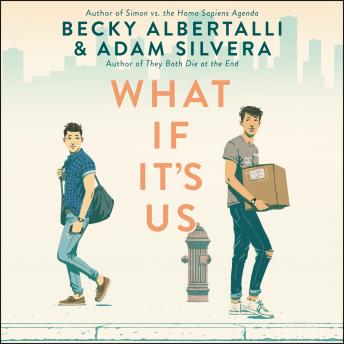 What If It's Us

Critically acclaimed and bestselling authors Becky Albertalli and Adam Silvera combine their talents in this smart, funny, heartfelt collaboration about two very different boys who can’t decide if the universe is pushing them together—or pulling them apart.

ARTHUR is only in New York for the summer, but if Broadway has taught him anything, it’s that the universe can deliver a showstopping romance when you least expect it.

BEN thinks the universe needs to mind its business. If the universe had his back, he wouldn’t be on his way to the post office carrying a box of his ex-boyfriend’s things.

But when Arthur and Ben meet-cute at the post office, what exactly does the universe have in store for them . . . ?

Maybe nothing. After all, they get separated.

Maybe everything. After all, they get reunited.

But what if they can’t nail a first date even after three do-overs?

What if Arthur tries too hard to make it work and Ben doesn’t try hard enough?

What if life really isn’t like a Broadway play?

But what if it is?

Plus don't miss Here's to Us! Becky Albertalli and Adam Silvera reunite to continue the story of Arthur and Ben, the boys readers first fell for in What If It’s Us.

It took me a while to get around to this one. I wasn't keen on Arthur at first or maybe not the over all theme. still, after really thinking about it, it was just the sort of thing I would like. first thing's first; the characters are teenagers and this is a book meant for teenagers. Keeping that in mind, it really wasn't meant for me anyway. maybe that's why i struggled when i got spoiled for the ending. the book was over all fun and cute. it's really romance heavy and the only plot is the romance. the only rise and fall are the rises and falls in the romance. It is a very slice of life and love type of book. its young love, though, so dont get your expectations too high. I set my expectations too high, I think. Because of that I really didnt finish once I found out how things end. You may love it and maybe look back at my review and say "but it was beautiful and realistic" and maybe you would be right, but I have to be true to how I feel. I feel disappointment and like I was told the universe was grand and beautiful and then the same person who told me that unceremoniously ripped the rug out from under me and said that was the universe, too. the Authors and the Narrators still deserve a lot of praise for thier hard work and I feel a little bad I could only find it in me to give this 3 stars.....

A sweet little book. It is a teen romance, very modern, light and fun. Good read.

Great teen story. I hope they get a part two when they grow up. Like jay bell’ stories. Narration was awesome. I made the mistake of listening before bedtime. And was up all night. Extremely funny speaking from the D.