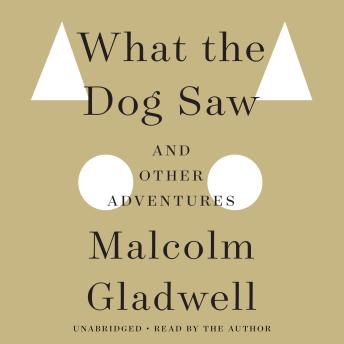 What the Dog Saw: And Other Adventures

The bestselling author of The Bomber Mafia focuses on "minor geniuses" and idiosyncratic behavior to illuminate the ways all of us organize experience in this "delightful" (Bloomberg News) collection of writings from The New Yorker.

What is the difference between choking and panicking? Why are there dozens of varieties of mustard-but only one variety of ketchup? What do football players teach us about how to hire teachers? What does hair dye tell us about the history of the 20th century?

In the past decade, Malcolm Gladwell has written three books that have radically changed how we understand our world and ourselves: The Tipping Point; Blink; and Outliers. Now, in What the Dog Saw, he brings together, for the first time, the best of his writing from TheNew Yorker over the same period.

Here is the bittersweet tale of the inventor of the birth control pill, and the dazzling inventions of the pasta sauce pioneer Howard Moscowitz. Gladwell sits with Ron Popeil, the king of the American kitchen, as he sells rotisserie ovens, and divines the secrets of Cesar Millan, the "dog whisperer" who can calm savage animals with the touch of his hand. He explores intelligence tests and ethnic profiling and "hindsight bias" and why it was that everyone in Silicon Valley once tripped over themselves to hire the same college graduate.

"Good writing," Gladwell says in his preface, "does not succeed or fail on the strength of its ability to persuade. It succeeds or fails on the strength of its ability to engage you, to make you think, to give you a glimpse into someone else's head." What the Dog Saw is yet another example of the buoyant spirit and unflagging curiosity that have made Malcolm Gladwell our most brilliant investigator of the hidden extraordinary.

Who really cares about how/why Ron Popiel became a great huckster? I couldn't make it very far into this book, fell asleep.

Extremely well written. Some sections were fascinating; others did not interest me. May be sort of a hit or miss.

This is a very fascinating collection of ideas. If you like to look at why things are the way they are you will really enjoy this book!

It may not be fair for me to review this book because I didn't listen to the whole thing. I listened to the first 3 tracks, scanned through the next 15 and decided that this was going to be WAY too boring for me...

Best ever introduction to Malcom Gladwell, who usually appears in the New Yorker, and also has written half a dozen very good books. If you don't learn something (perhaps alot of things) while listening to this very good series of short peices, I will refund your money. Fascinating. Read by the author which turns out to be very also very good in this case (it isn't always: are you hearing me Stephen King?)

A collection of previously written articles which bear no connection to each other. Some are interesting, some aren't.

Not Gladwell at his best but a great collection of the "interesting". By that I mean really interesting examples of surprising back stories that illustrate just how perceptions are created to the benefit or detriment of a product that affect it's success and adoption.

This title is due for release on October 20, 2009
We'll send you an email as soon as it is available!