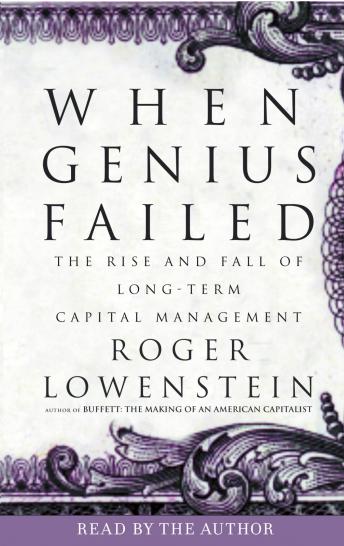 When Genius Failed: The Rise and Fall of Long-Term Capital Management

John Meriwether, a famously successful Wall Street trader, spent the 1980s as a partner at Salomon Brothers, establishing the best--and the brainiest--bond arbitrage group in the world. A mysterious and shy midwesterner, he knitted together a group of Ph.D.-certified arbitrageurs who rewarded him with filial devotion and fabulous profits. Then, in 1991, in the wake of a scandal involving one of his traders, Meriwether abruptly resigned. For two years, his fiercely loyal team--convinced that the chief had been unfairly victimized--plotted their boss's return. Then, in 1993, Meriwether made a historic offer. He gathered together his former disciples and a handful of supereconomists from academia and proposed that they become partners in a new hedge fund different from any Wall Street had ever seen. And so Long-Term Capital Management was born.
In a decade that had seen the longest and most rewarding bull market in history, hedge funds were the ne plus ultra of investments: discreet, private clubs limited to those rich enough to pony up millions. They promised that the investors' money would be placed in a variety of trades simultaneously--a "hedging" strategy designed to minimize the possibility of loss. At Long-Term, Meriwether & Co. truly believed that their finely tuned computer models had tamed the genie of risk, and would allow them to bet on the future with near mathematical certainty. And thanks to their cast--which included a pair of future Nobel Prize winners--investors believed them.
From the moment Long-Term opened their offices in posh Greenwich, Connecticut, miles from the pandemonium of Wall Street, it was clear that this would be a hedge fund apart from all others. Though they viewed the big Wall Street investment banks with disdain, so great was Long-Term's aura that these very banks lined up to provide the firm with financing, and on the very sweetest of terms. So self-certain were Long-Term's traders that they borrowed with little concern about the leverage. At first, Long-Term's models stayed on script, and this new gold standard in hedge funds boasted such incredible returns that private investors and even central banks clamored to invest more money. It seemed the geniuses in Greenwich couldn't lose.
Four years later, when a default in Russia set off a global storm that Long-Term's models hadn't anticipated, its supposedly safe portfolios imploded. In five weeks, the professors went from mega-rich geniuses to discredited failures. With the firm about to go under, its staggering $100 billion balance sheet threatened to drag down markets around the world. At the eleventh hour, fearing that the financial system of the world was in peril, the Federal Reserve Bank hastily summoned Wall Street's leading banks to underwrite a bailout.
Roger Lowenstein, the bestselling author of Buffett, captures Long-Term's roller-coaster ride in gripping detail. Drawing on confidential internal memos and interviews with dozens of key players, Lowenstein crafts a story that reads like a first-rate thriller from beginning to end. He explains not just how the fund made and lost its money, but what it was about the personalities of Long-Term's partners, the arrogance of their mathematical certainties, and the late-nineties culture of Wall Street that made it all possible.
When Genius Failed is the cautionary financial tale of our time, the gripping saga of what happened when an elite group of investors believed they could actually deconstruct risk and use virtually limitless leverage to create limitless wealth. In Roger Lowenstein's hands, it is a brilliant tale peppered with fast money, vivid characters, and high drama.

When Genius Failed: The Rise and Fall of Long-Term Capital Management

This title is due for release on September 4, 2001
We'll send you an email as soon as it is available!