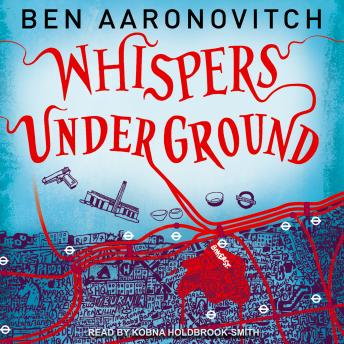 #3 of Rivers of London

It begins with a dead body at the far end of Baker Street tube station, all that remains of American exchange student James Gallagher-and the victim's wealthy, politically powerful family is understandably eager to get to the bottom of the gruesome murder. The trouble is, the bottom-if it exists at all-is deeper and more unnatural than anyone suspects . . . except, that is, for London constable and sorcerer's apprentice Peter Grant. With Inspector Nightingale, the last registered wizard in England, tied up in the hunt for the rogue magician known as 'the Faceless Man,' it's up to Peter to plumb the haunted depths of the oldest, largest, and-as of now-deadliest subway system in the world.At least he won't be alone. No, the FBI has sent over a crack agent to help. She's young, ambitious, beautiful . . . and a born-again Christian apt to view any magic as the work of the devil. Oh yeah-that's going to go well.

When Peter Grant\'s young cousin, Abigail Kamara, drags him and his colleague and fellow magical apprentice, Leslie May, to a railroad track running under a school playground, they do find the ghost. But the ghost is no threat, and doesn\'t seem to be pointing to anything of concern now. So when the first case that lands on his desk on Monday is a man stabbed to death on the track at Baker Street Station, he puts the ghost aside, and sets about finding out why the British Transport Police officer, Sgt. Kumar, thinks there\'s something odd about the case in a way that makes it the Folly\'s business.\r\n\r\nAll in all, a very good story, with characters who continue to grow.\r\n\r\nRecommended.\r\n\r\nI bought this audiobook.

Fun series so far. Looking forward to the 4th!

This title is due for release on September 28, 2012
We'll send you an email as soon as it is available!