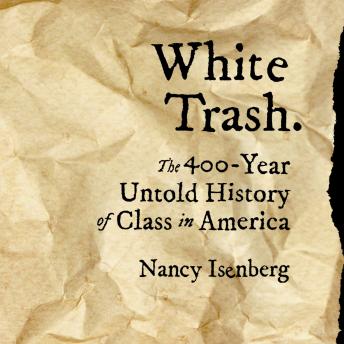 White Trash: The 400-Year Untold History of Class in America

The wretched and landless poor have existed from the time of the earliest British colonial settlement. They were alternately known as 'waste people,' 'offals,' 'rubbish,' 'lazy lubbers,' and 'crackers.' By the 1850s, the downtrodden included so-called 'clay eaters' and 'sandhillers,' known for prematurely aged children distinguished by their yellowish skin, ragged clothing, and listless minds.

In White Trash, Nancy Isenberg upends assumptions about America's supposedly class-free society. Poor whites were central to the rise of the Republican Party in the early nineteenth century, and the Civil War itself was fought over class issues nearly as much as it was fought over slavery. Reconstruction pitted poor white trash against newly freed slaves, which factored in the rise of eugenics. These poor were at the heart of New Deal reforms and LBJ's Great Society; they haunt us in reality TV shows like Here Comes Honey Boo Boo and Duck Dynasty.

We acknowledge racial injustice as an ugly stain on our nation's history. With Isenberg's landmark book, we will have to face the truth about the enduring, malevolent nature of class as well.

Love how white trash from the South who can't accept the truth they've been played since Day One of this country hate this book.

Just another racist, anti-white, anti Southern Leftist tract!!!! Full of basic Leftist stereotypes about white people, particularly Southern whites, that is far from the mark of understanding poor white people. Just an excuse to use racial slurs against a group of people, without fear of being "canceled" for being "racist". Very condescending book, full of lies and vitriol against poor, white folks. If you want to find out the truth about "white trash", read "The Redneck Manifesto" by Jim Goad. This is just racist garbage. A waste of time!!!!!

preachy. snobby. typical. I regret my purchase of this one.

a very woke book, while has historical truths very slanted in views.

This is a book that gets much better as it goes . The beginning chapters of the book set the foundation for what is to follow later, so that it is easier to understand why poor whites were boxed in and trapped by American society at large in their poverty. The poor have always been with us, and the early phase of the book details this. All throughout the book, pejorative terms fly. But this is done in a historical context, and I found it interesting as I began to see how many words I grew up with came into being. This too, was part of the history. And some of those terms still exist today, showing those prejudices still follow us into the new millennium. James Carville, remember, had a recent famous quote about trailer parks that illustrate how the landowner uses language to help keep the poor down. Even today. My biggest insight came as they began to describe the Civil War era. Though an important part, it would seem that slavery was not the only reason the war was waged. The rich landowners who controlled the plantations with their puffed up sense of entitlement and superiority were the main driving force and the poor unfortunates, white and black both, who were forced to work it for them, were their victims. It also answered a question of mine as to exactly why Sherman in particular was so driven to so absolutely destroy the South. And so it goes, as the book marches on to the present. Anyone who wants to understand here in Flyover Country why the East Coast elites and Hollywood celebrities so vehemently oppose us and work to undermine all of our shared common values really need to listen to this. Objectively. Then you will see how though things have changed dramatically, at heart, things also remain the same. I only give this a four out of five because the first part of the book detailing the Colonial period of American history is a little bit dry. But very important to give context and insight for what comes later.

I enjoyed learning about the background of our American history, stories we didn't read or were taught in history classes. These stories fill in the gaps about our economy, so-called class and income distinctions, and the differences between blacks (and other POC and cultures) and low income whites throughout the past 400 years. Whether you agree with everything the author expresses or not, this book definitely creates many topics for discussion and research.

Wow what a great book. I acknowledge certain parts might’ve a little “over the top” but the logic presented sure explains a lot.

This has been one of the best history books I have ever consumed. While I have read many books pertaining to the history of the United States, this one takes a novel approach and looks at history through the lens of class in America. This has been so eye-opening for me. Though I have always been able to see "Class" in America, this book has given verbiage to my observations and opened my eyes to many of the intentional divisions that have been made. While I generally believe that America has an environment where one can "pull themselves up by their own bootstraps" and transform themselves through "upward-mobility," this book highlighted for me how the system is rigged (and very much intentionally) to keep people in their place or within their own "class." To change one's own stripes, as methodically laid out in this well-researched book, is a momentous endeavor indeed. I did not agree with all of the characterizations of the actors in this text, but the results of their decisions were made very clear, regardless of their intentions. Nancy Isenberg's observations are astute and I found the ideas and interpretations profound. At times I found myself feeling pity for those in our society who are but pawns in this game played by our so-called elect. Nancy calls into question the thought or notion of the "American Dream." She asks the dubious question, "Do you believe in the American Dream? If so, who's dream is it?" ... Great question!

intriguing book and premise but incredibly long winded. It reads more like a text book than anything else, pretty dry. It doesn't help that the narrator rarely has any inflection in her voice. with some inflection and emotion the long winded book would be much more interesting.

A scholarly, and not condemning, look at the lower classes in America. A very thoroughly researched work. Reading this is somewhat like taking a college course, but I feel the better for a more complete understanding of the history of our culture. Many people now days are afraid to confront the details of our past, but when we challenge ourselves to do so, we can move forward toward creating a much brighter future.

A better title would be literary trash.