White Walls: A Memoir About Motherhood, Daughterhood, and the Mess in Between 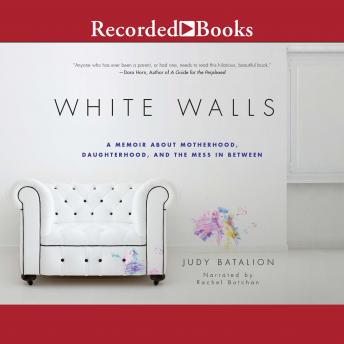 A memoir of mothers and daughters, hoarding, and healing. Judy Batalion grew up in a house filled with endless piles of junk and layers of crumbs and dust; suffocated by tuna fish cans, old papers and magazines, swivel chairs, tea bags, clocks, cameras, printers, VHS tapes, ballpoint pens . obsessively gathered and stored by her hoarder mother. The first chance she had, she escaped the clutter to create a new identity-one made of order, regimen, and clean white walls. Until, one day, she found herself enmeshed in life's biggest chaos: motherhood. Confronted with the daunting task of raising a daughter after her own dysfunctional childhood, Judy reflected on not only her own upbringing but the lives of her mother and grandmother, Jewish Polish immigrants who had escaped the Holocaust. What she discovered astonished her. The women in her family, despite their differences, were even more closely connected than she ever knew-from her grandmother Zelda to her daughter of the same name. And, despite the hardships of her own mother-daughter relationship, it was that bond that was slowly healing her old wounds. Told with heartbreaking honesty and humor, this is Judy's poignant account of her trials negotiating the messiness of motherhood and the indelible marks that mothers and daughters make on each other's lives.

White Walls: A Memoir About Motherhood, Daughterhood, and the Mess in Between