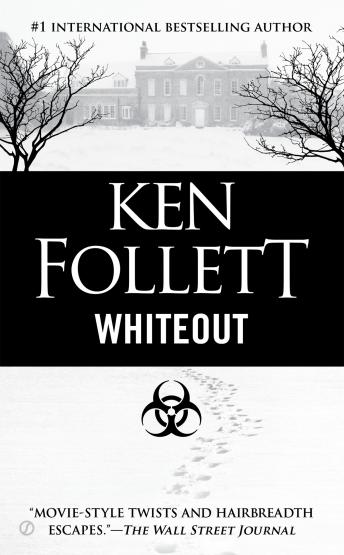 'Everyone likes a page-turner, and Follett is the best.' —The Philadelphia Inquirer

'A hell of a storyteller' (Entertainment Weekly), #1 New York Times bestselling author Ken Follett reinvents the thriller with each new novel. But nothing matches the intricate knife-edge drama of Whiteout. . . .

A missing canister of a deadly virus. A lab technician bleeding from the eyes. Toni Gallo, the security director of a Scottish medical research firm, knows she has problems, but she has no idea of the nightmare to come.

As a Christmas Eve blizzard whips out of the north, several people, Toni among them, converge on a remote family house. All have something to gain or lose from the drug developed to fight the virus. As the storm worsens, the emotional sparks—jealousies, distrust, sexual attraction, rivalries—crackle; desperate secrets are revealed; hidden traitors and unexpected heroes emerge. Filled with startling twists at every turn, Whiteout rockets Follett into a class by himself.

The problem that I have with any book by Ken Follet is that the Pillars books were SO GREAT that the others I have tried just end up bland and hollow in comparison. This book was entertaining enough, if somewhat bland.

It's nothing like his other books. Imo it wasn't worth the $

i really enjoyed the book the narrator was great. suspensefull and good storyline especially relevant with other virus threats

Not Follett's best. Very slow getting started. Story finally developed and the ending was great.

A fast paced book with great narration. Great twists and turns yet at times predictable. I highly recommend it.

This book is one of those that makes you look forward to getting in the car to listen. You can't help but like the characters, and every twist has you wondering what will happen next. Only the romance was a bit hard to buy.

I really enjoyed this book. It kept me wanting to listen to more. I thought the ending was just right, I have been in a situation like that before where you're not certain you like someone until unseen circumstances bring you together. I liked the ending. I would definitely re-rent this book.

Excellent Book. A lot of action and I loved the reader. I'll purchase this one for my library. Will definitely want to listen to it again!!!

This was a well constructed book with good plot twists. The narrator did a good job with the various Scottish and British accents. I highly recommend this book!

Outstanding. Riveting story, well read. Hated when my commute was over.

What a perfect read for commuters! While occasionally predictable, it was a total "page-turner" ~ I even carried the CDs between my car and home, so I wouldn't have to wait til the next day to find out what happened next!

What an immagination------------I understand why Harry Potter is so popular. I will continue to read the series.

This is a great book with a lot of suspense and romance.

Fun! Took this book on vacation and it was the perfect, mindless entertainment for relaxing. The listener needs to suspend belief about all of the coincidences - but there are some very interesting characters. Enjoy!

unbelievable--literally! interesting plot and characters, but too many actions were not believable.

This was an enjoyable listening time. The accents were pretty good except, when the character was supposed to be British, he still sounded Irish. Otherwise an excellent reading and a fast paced story.

This title is due for release on January 10, 2005
We'll send you an email as soon as it is available!