Wide as the Waters: The Story of the English Bible and the Revolution it Inspired 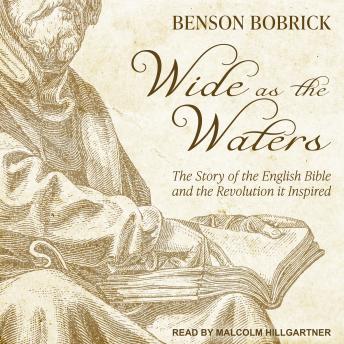 Next to the Bible itself, the English Bible was-and is-the most influential book ever published.

The most famous of all English Bibles, the King James Version, was the culmination of centuries of work by various translators, from John Wycliffe, the fourteenth-century catalyst of English Bible translation, to the committee of scholars who collaborated on the King James translation. Wide as the Waters examines the life and work of Wycliffe and recounts the tribulations of his successors, including William Tyndale, who was martyred, Miles Coverdale, and others who came to bitter ends. It traces the story of the English Bible through the tumultuous reigns of Henry VIII, Edward VI, Mary Tudor, and Elizabeth I, a time of fierce contest between Catholics and Protes-tants in England, as the struggle to establish a vernacular Bible was fought among competing factions. In the course of that struggle, Sir Thomas More, later made a Catholic saint, helped orchestrate the assault on the English Bible, only to find his own true faith the plaything of his king.

Wide as the Waters is a story about a crucial epoch in the history of Christianity, about the English language and society, and about a book that changed the course of human events.

Wide as the Waters: The Story of the English Bible and the Revolution it Inspired