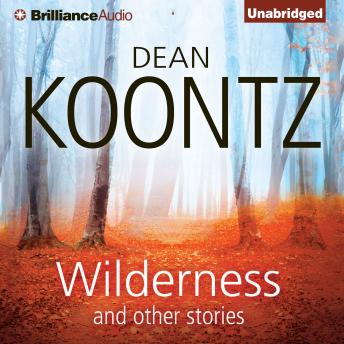 Wilderness and Other Stories

“The world is a machine that produces endless surprises and mysteries layered on mysteries.”'Wilderness,' a darkly intriguing short story first published as an e-book original, was written as prelude to Dean Koontz’s novel of mystery, suspense, and strange wonder—Innocence.Addison Goodheart was born in an isolated home surrounded by a deep forest, never known to his father, kept secret from everyone but his mother, who barely accepts him. Only in the woods, among the wildlife, is Addison truly welcome. Only there can he be at peace. Until the day he first knows terror, the day when his life changes radically and forever....Twelve of the other fourteen short stories and novelettes included in this audio anthology were most recently reissued in a print collection entitled Strange Highways, published by Warner Books (1995). The other two—'The Scariest Thing I Know' (2000) first published in Martha Stewart Living magazine and 'Hostage Situation' (2009) in The New York Times Summer Thriller series.Only the short work 'Down in the Darkness,' has ever been produced for audio.

Very immersive story line. Very nice use of descriptive words. I personally thought that in a couple of sections a very good picture was painted.

The stories fed. were and engaging. I like that didn't have to listen for hours for conclusion, resolution and climax.

Took me a while to catch on to each new story. I don't generally like sequential short stories. But, green can is the best. So I like his short stories. I just wish there was someway to make the definition. Between the story. Without the visual of a new chapter, it's not as clear when listening auditorily.

Very good while doing yard work. Anything Kpontz does is a masterpiece.