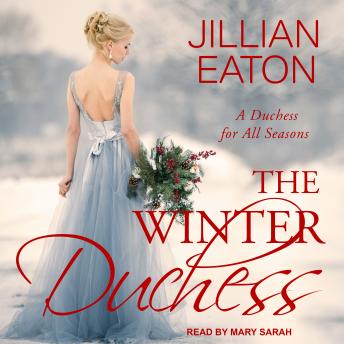 #1 of Duchess for All Seasons

A shy wallflower, Caroline hasn't the faintest idea why the Duke of Readington chose her to be his bride. She could ask, but that would mean speaking to him . . . and truth be told, she'd rather have a conversation with the devil. Her new husband may be one of the most powerful men in all of England-not to mention the handsomest-but he's also cruel, callous, and has a heart colder than ice.

Eric married Caroline for one simple reason: he wasn't in love with her. Having seen firsthand how love can bring a man to his knees, he's determined not to make the same mistakes his father did. Which is why he's going to spend just enough time with his new bride to assure himself of an heir before he leaves her and returns to London. At least that was the plan until a winter storm leaves them stranded. Now every time Eric turns around he finds himself stumbling over the wife he never wanted . . . but is slowly beginning to desire.

As cold winds howl outside the manor, inside of it a duke's heart is finally starting to melt as he finds himself falling for the one woman he was never supposed to love . . . but can she love him in return?

It was enjoyable enough but didn’t have much depth to it.

not as good as expected. the narration is ok, but could have been batter.

Lovely short romantic story! It was a delight to listen to.

Having seen what he thought was love ruin his childhood, Eric wasn't interested. He only wanted a wife to provide him with an heir. Caroline, the woman he chose to wed wanted love. Can she melt his cold, callous heart by Christmas? The Winter Duchess was a short and sweet novella, well worth the quick listen.

It was just meh honestly! i didn't like the hero

Boring not worth the credit.