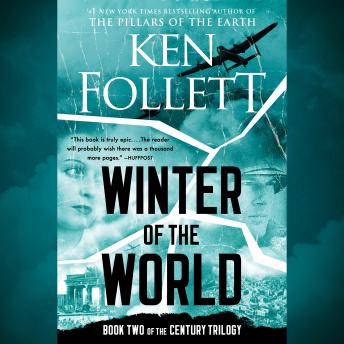 Winter of the World: Book Two of the Century Trilogy

#2 of The Century Trilogy

Picking up where Fall of Giants, the first novel in the extraordinary Century Trilogy, left off, Winter of the World follows its five interrelated families—American, German, Russian, English, and Welsh—through a time of enormous social, political, and economic turmoil, beginning with the rise of the Third Reich, through the great dramas of World War II, and into the beginning of the long Cold War.

Carla von Ulrich, born of German and English parents, finds her life engulfed by the Nazi tide until daring to commit a deed of great courage and heartbreak . . . . American brothers Woody and Chuck Dewar, each with a secret, take separate paths to momentous events, one in Washington, the other in the bloody jungles of the Pacific . . . . English student Lloyd Williams discovers in the crucible of the Spanish Civil War that he must fight Communism just as hard as Fascism . . . . Daisy Peshkov, a driven social climber, cares only for popularity and the fast set until war transforms her life, while her cousin Volodya carves out a position in Soviet intelligence that will affect not only this war but also the war to come.

I love this series I can’t get enough of it!!!

Incredible follow up to "Fall of Giants". Both my wife and I can't stop listening. Great story, characters, and writing. And you get a history lesson along the way!

Excellent series. On the third book now...I will be sad to finish as I have really enjoyed these books!

Awesome story by an excellent story teller. Narration is great, really fits mood of the story. Highly recommend this book, and audiobooks.com.

I really enjoyed this book, esp the way Follett interweaves historical fact and his fictional characters. It covers a wide breadth of European

I have loved all of Ken Follett's works and could not put them down. Winter of the World, however, caused my mind to warder and lose focus. I kept trying to give it a chance and listened to the first eight CDs but just never saw the point of the book. I love 20th century history but this held no relevance and was just plain boring, scattered and confusing. I am disappointed.

I truly enjoyed this book. I loved how the story weaved through all the character's lives. The beginning was hard to take, but once you get through it you are hooked. I loved all the historical facts throughout. I actually learned a thing or two.

Heavy on Historical facts and light on relationships, so it dragged a little for me.