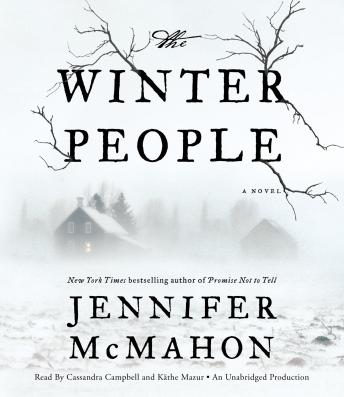 The Winter People: A Novel

The New York Times bestselling author of Promise Not to Tell returns with a simmering literary thriller about ghostly secrets, dark choices, and the unbreakable bond between mothers and daughters . . . sometimes too unbreakable.

West Hall, Vermont, has always been a town of strange disappearances and old legends. The most mysterious is that of Sara Harrison Shea, who, in 1908, was found dead in the field behind her house just months after the tragic death of her daughter, Gertie. Now, in present day, nineteen-year-old Ruthie lives in Sara's farmhouse with her mother, Alice, and her younger sister, Fawn. Alice has always insisted that they live off the grid, a decision that suddenly proves perilous when Ruthie wakes up one morning to find that Alice has vanished without a trace. Searching for clues, she is startled to find a copy of Sara Harrison Shea's diary hidden beneath the floorboards of her mother's bedroom. As Ruthie gets sucked deeper into the mystery of Sara's fate, she discovers that she's not the only person who's desperately looking for someone that they've lost. But she may be the only one who can stop history from repeating itself.

I absolutely loved this book. Narrator brilliant. The story kept giving and cleverly put together in an unexpected ending.

I enjoyed this book mostly, but I was ready for it to end when it did.

A really strong 3 stars. I could nitpick at some of the writing choices that didn’t work for me, but it was overall deeply satisfying and I would recommend it. Wonderfully creepy.

I always read along as I listen. I couldn't stop with this book. Just when you think you have an idea of what is going on, there is a twist! Excellent read.