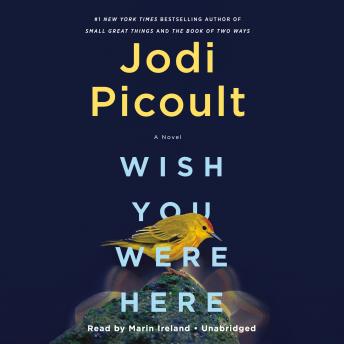 Wish You Were Here: A Novel

#1 NEW YORK TIMES BESTSELLER • From the author of Small Great Things and The Book of Two Ways comes “a powerfully evocative story of resilience and the triumph of the human spirit” (Taylor Jenkins Reid, author of The Seven Husbands of Evelyn Hugo and Daisy Jones & The Six)

Diana O’Toole is perfectly on track. She will be married by thirty, done having kids by thirty-five, and move out to the New York City suburbs, all while climbing the professional ladder in the cutthroat art auction world. She’s an associate specialist at Sotheby’s now, but her boss has hinted at a promotion if she can close a deal with a high-profile client. She’s not engaged just yet, but she knows her boyfriend, Finn, a surgical resident, is about to propose on their romantic getaway to the Galápagos—days before her thirtieth birthday. Right on time.

But then a virus that felt worlds away has appeared in the city, and on the eve of their departure, Finn breaks the news: It’s all hands on deck at the hospital. He has to stay behind. You should still go, he assures her, since it would be a shame for all of their nonrefundable trip to go to waste. And so, reluctantly, she goes.

Almost immediately, Diana’s dream vacation goes awry. Her luggage is lost, the Wi-Fi is nearly nonexistent, and the hotel they’d booked is shut down due to the pandemic. In fact, the whole island is now under quarantine, and she is stranded until the borders reopen. Completely isolated, she must venture beyond her comfort zone. Slowly, she carves out a connection with a local family when a teenager with a secret opens up to Diana, despite her father’s suspicion of outsiders.

In the Galápagos Islands, where Darwin’s theory of evolution by natural selection was formed, Diana finds herself examining her relationships, her choices, and herself—and wondering if when she goes home, she too will have evolved into someone completely different.

I’m a big Picoult fan! Not my favorite Jodi Picoult book. It dragged on. I wouldn’t be able to ready or. Listening just filled time, but not one I would want to re read or listen to again.

I just LOVE Jodi Picoult- but this one disappointed me…well,well…I guess every author has to have that pne book that isn’t as good as the others..

The story led me to a place and time I wasn’t expecting. Great narration, loved the story.

Very interesting read! The narrator was fluent in all her accents, really kept me engaged. Surprise ending for sure!

By far, the best book I’ve heard in a long time! Passionate, heart warming Shelly B

Awesome read! Relates to a true story by a friend of mine that believed he was an astronaut and was having trouble breathing with the air in the space ship He was on ventilator for 30days. He survived

Very well done. I’m a big Picoult fan and also a nurse practitioner working in the ER. I’ve seen this first hand and it hurt to listen at times because it brought me back to the beginning when we knew nothing about Covid. People who’ve been on a ventilator have many stories. I think she did a good job reflecting how different people have coped with this virus. Narrator fantastic!

The narration was excellent; I never once stopped to think about which character's voice she was and she wasn't annoyingly trying to be masculine or feminine. The writing was quite formal though, with a lot of I am instead of I'm, etc, even though the tone of the story was informal. I thought the story was good and relevant, however, if you have lost a loved one to Covid, I suggest you not read or listen to this book. I lost my Dad to Covid and witnessed firsthand how it can ravage the body. Hearing the descriptions of Covid's impacts on a body in great detail in this book was terribly heartbreaking for me in a very personal way.

An interesting perspective and ok story.

Couldn’t get through it. Shocking how bad this book is given the author. Characters were unrealistic and immature.

Very contemporary analysis of our recent times of fear and life changes .. Also illustrates that the trend of “living together” is no guarantee of a later happy Marriage. Marriage needs complete commitment by each partner who really knows who they are and who have similar goals in life !

This story is terrific with a surprise twist in the middle. Only an hour left. I hope the ending does not disappoint.

COVID’s First Year Captured! Wasn’t sure I could deal with thinly-veiled references to the Beatles, or more about the Corona virus, but in the end everything worked. The mid-story shift was a shock, but Picoult always does her homework in terms of research, capturing the fear, isolation, uncertainties, medical realities behind the scene, and multiple points of view to the same story. Excellent narration in terms of accents, pronunciation, character tone, and emotion.

Just like Diana, I wanted to stay in this book forever! Jodi Picoult captures our first year of Covid in a wonderful, sometimes heartbreaking story.