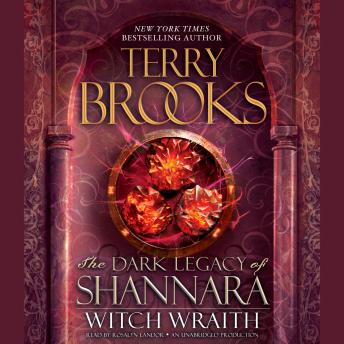 For centuries the Four Lands enjoyed freedom from its demon-haunted past, protected by magic-enhanced borders from the dark dimension known as the Forbidding and the profound evil imprisoned there. But now the unthinkable is happening: The ancient wards securing the barrier between order and mayhem have begun to erode—and generations of bloodthirsty, monstrous creatures, fueled by a rage thousands of years in the making, are poised to spill forth, seeking revenge for what was done to them.

Young Elf Arling Elessedil possesses the enchanted means to close the breach and once more seal the denizens of the Forbidding in their prison. But when she falls into the hands of the powerful Federation’s diabolical Prime Minister, her efforts may be doomed. Only her determined sister, Aphen, who bears the Elfstones and commands their magic, has any hope of saving Arling from the hideous fate her captor has in store.

Meanwhile, Railing Ohmsford—desperate to save his imprisoned brother—seeks to discover if his famed but ill-fated ancestor Grianne is still alive and willing to help him save the world . . . no matter the odds or the consequences.

“The final chapter in Brooks’s latest trilogy set in his beloved world of Shannara peaks in a bittersweet conclusion that seems to set the stage for future books. A must for the numerous die-hard Shannara fans.”—Library Journal

“If Tolkien is the grandfather of modern fantasy, Terry Brooks is its favorite uncle.”—Peter V. Brett, New York Times bestselling author of The Desert Spear

“I can’t even begin to count how many of Terry Brooks’s books I’ve read (and reread) over the years. From Shannara to Landover, his work was a huge part of my childhood.”—Patrick Rothfuss, New York Times bestselling author of The Name of the Wind

“Terry Brooks is a master of the craft and a trailblazer who established fantasy as a viable genre. He is required reading.”—Brent Weeks, New York Times bestselling author of The Night Angel Trilogy

“The Shannara books were among the first to really capture my imagination. My daydreams and therefore my stories will always owe a debt to Terry Brooks.”—Brandon Mull, #1 New York Times bestselling author of the Beyonders and Fablehaven series