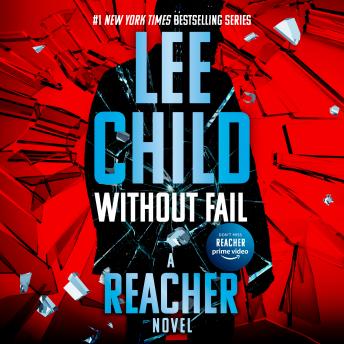 Skilled, cautious, and anonymous, Jack Reacher is perfect for the job: to assassinate the vice president of the United States. Theoretically, of course. A female Secret Service agent wants Reacher to find the holes in her system, and fast—because a covert group already has the vice president in their sights. They’ve planned well. There’s just one thing they didn’t plan on: Reacher.

Bad dialogue! Poor reader for probably a great book! Sorry I am not buying any more. "Reacher " novels, if this same guy is the reader! B

I agree with Vaughn smith...the reader is not very good at all --- there is not much variety in the characters and every female sounds like a whiny cry-baby even when she is suppose to be sounding tough. --- Need another reader. It is because of him that I have rated it so low. :(

The book was terrible, the narrator was terrible. The book is written simplistic, no substance. Many details are ridiculous and distract from the story; for instance, why even mention that, when she orders coffee from room service, she orders "three cups, three saucers, and three creams and sugars"; when you order coffee from room service you GET cups, saucers, and cream and sugar. And when the coffee arrived, why state that she "turned over the cups, poured the coffee ..." Was the author paid by the word? Another example, When Reacher meets Stiverson, he "offered his hand. Stiverson took it". For heaven's sake of course they did; give me content instead of wasted characters on the page. What did the handshake say about Stiverson? Was it strong? Weak? Demand respect? Was it limp , showing lack of self confidence or guilt or ... Who knows, just give us details meat, details. Very poorly written and I was bored or wondering "why" throughout the entire book. Narrator sounded as though he was out of breath, struggling to get his words out. He did not do the female voices well and sometimes they sounded like a falsetto. Also, sorry, but it sounded very much as though he had false teeth that did not fit well. I will not listen to a Lee Child book again nor will I listen to a book narrated by Dick Hill.

Great read. Love this series Reading this is like getting caught up with an old friend. The narrator did a great job as well.

Jack Reacher shows us once again why he is the baddest good guy in the crime fighting business.

As a big Reacher fan, this book stood out as one of his better books.As always, Dick Hill's narration was perfect for the character.

Slow story hard to persevere but worth it if you do .

A little slow in the middle but the ending is great as always.

Very drawn out, story was decent.