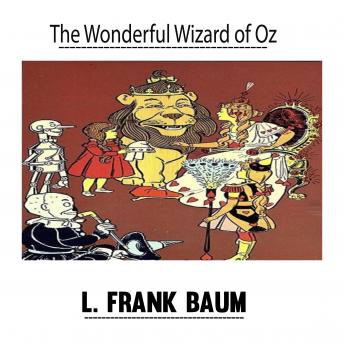 The Wonderful Wizard of Oz by L. Frank Baum

First published in 1901, "The Wonderful Wizard of Oz" follows the magical adventure of Dorothy, a young girl who lives with her Aunt Em and Uncle Henry on a farm in Kansas. One day when Dorothy is caught up in tornado with her little dog, Toto, she finds her farmhouse has been magically transplanted to Munchkin Country in the mystical Land of Oz. Her house lands on the evil Wicked Witch of the East, killing her, and freeing the Munchkins from her rule. As a reward the Good Witch of the North gives Dorothy the magical Silver Shoes that belonged to the Witch and sets her on her way down the yellow brick road to the Emerald City to ask the Wizard for help in returning to Kansas. Along the way she meets several interesting characters including the Scarecrow, the Tin Woodman, and the Cowardly Lion who join her on her travels to ask the Wizard for help of their own. The journey is not without peril though, as the Wicked Witch of the West, who wants revenge for the killing of her sister and to regain the magical Silver Shoes, unleashes numerous dangers against Dorothy and her companions. "The Wonderful Wizard of Oz" is a classic story of fantasy which is considered to be the first American fairy tale.

This title is due for release on January 16, 2019
We'll send you an email as soon as it is available!