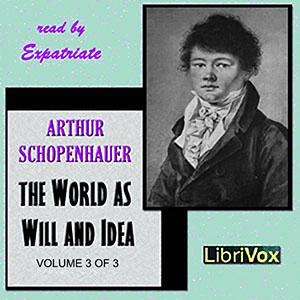 In this work, Schopenhauer explains his fundamental idea that at the root of the reality we see around us is a Will that eternally, insatiably seeks to be satisfied. Each human Subject observes the Objects around her from the perspective of that fundamental Will working within each person. The human observer is distracted by the details of life and individual distinctions that obscure this Will; only by penetrating this "principium individuationis" (which is enslaved by the cause-and-effect tyranny of the Principle of Sufficient Reason) can the observer perceive the essential Thing-In-Itself. Art has the power to make us see the Thing-In-Itself, the Platonic Idea freed from the individual particular manifestation of it, thus enabling us to transcend the individual Will and perceive something of true Reality. Perceiving the common Will in all humanity, we are able to come closer to an ego-less love based on that shared essence. Schopenhauer squarely faces the fact that existence is fundamentally suffering, but it would be simplistic to label him (as is so often done) as nothing but a pessimist. His affirmation of Art and Love is a transforming principle, having a powerful influence on writers such as Tolstoy. In the end, he chooses the Way of Negation as the path toward peace; by denying our Will, by silencing the many outbreaks of Will in our lives, we can approach the ultimate peace of annihilation that is the theme of the great Vedic philosophy of India, to which Schopenhauer admits his profound debt. - Summary by Expatriate

This title is due for release on August 26, 2016
We'll send you an email as soon as it is available!