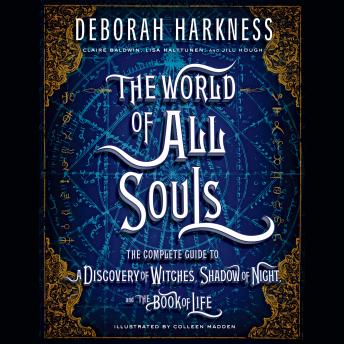 The World of All Souls: The Complete Guide to A Discovery of Witches, Shadow of Night, and The Book of Life

Part of All Souls Series

A Discovery of Witches introduced Diana Bishop, Oxford scholar and reluctant witch, and vampire geneticist Matthew Clairmont. Shadow of Night and The Book of Life carried Deborah Harkness's series to its spellbinding conclusion.

In The World of All Souls, Harkness shares the rich sources of inspiration behind her bewitching novels. She draws together synopses, character bios, maps, recipes, and even the science behind creatures, magic, and alchemy--all with her signature historian's touch. Bursting with fascinating facts and dazzling artwork, this essential handbook is a must-have for longtime fans and eager newcomers alike.

*Includes a Bonus PDF including recipes, images, translations, and more.

This such a joy for history buffs. A joy to the ears, and story of love conquering all.

I thought it was another part to the story, this book is a waste of money. Disapointed

The background of the characters is priceless.