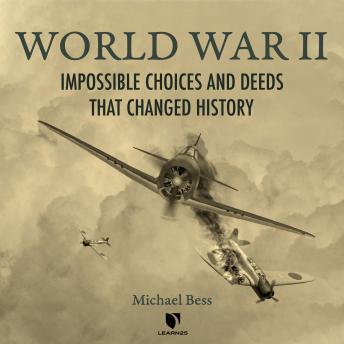 The lives of five generations, including yours, are indelibly marked by the deeds of those who fought in the Second World War. Join award-winning historian Michael Bess in exploring their stories.

In 24 engaging lectures, WWII historian and celebrated Vanderbilt professor Michael Bess introduces you to the men and women who faced some of history's toughest choices. You will meet the man who stopped Hitler's atomic bomb, the pilots who won the Battle of Midway, the Soviet "Man of Steel," the pacifist who built the bomb, and many more.

World War II was the quintessential "good war." But it was not free of moral ambiguity, painful dilemmas, and unavoidable compromises. How could ordinary citizens have brought themselves to perpetrate atrocities? Was the United States justified in dropping the atomic bomb? Why didn't the Allied Powers do more to help the Jews of Europe escape persecution before the war?

Professor Michael Bess marshals a trove of research and letters to probe big questions like these. While honoring the war's countless heroic deeds, and expressing deep gratitude to those who sacrificed so much for the freedom of subsequent generations, he also seeks a nuanced reckoning with the complicated and ambiguous moral dimensions of one of the most pivotal conflicts in human history.

We owe it to every generation impacted by the Second World War to understand the momentous choices and deeds that shaped our world.

This title is due for release on September 17, 2020
We'll send you an email as soon as it is available!