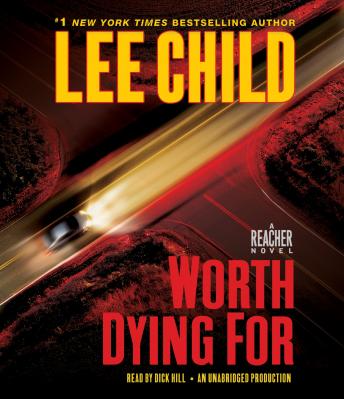 Worth Dying For: A Jack Reacher Novel

There’s deadly trouble in the corn country of Nebraska . . . and Jack Reacher walks right into it. First he falls foul of the Duncans, a local clan that has terrified an entire county into submission. But it’s the unsolved case of a missing child, already decades old, that Reacher can’t let go.

The Duncans want Reacher gone—and it’s not just past secrets they’re trying to hide. They’re awaiting a secret shipment that’s already late—and they have the kind of customers no one can afford to annoy. For as dangerous as the Duncans are, they’re just the bottom of a criminal food chain stretching halfway around the world.

For Reacher, it would have made much more sense to keep on going, to put some distance between himself and the hard-core trouble that’s bearing down on him. For Reacher, that was also impossible.

This title is a continuation of the storyline directly after 61 hours. It was kind of predictable but a good read/listen none the less. I recommend the Reacher series for anyone who likes the white knight storyline.

Typical Reacher book of trying to right a wrong. Story had a somewhat of a weak ending and things never seem to get taken care of that should. Narrator is greay again!

As always the book keeps your attention. Child's descriptive talents are amazing. It feels like you are there!

More violent than most Reacher books. Little too much for me.

This is one guy I never want to have a beef with cause I will loose! you just don't mess with this guy. Story is a little far fetched but who cares....I just love how Reacher diposes of the bad guys.........and the way his mind works..........moves right along. Rent it.

You really want to listen to the unabridged version, because it's that good. 61 Hours was a hard act to follow, but Lee Child was up to the task. What starts off looking like wife beating in a small town becomes far more sinister as the story unfolds. Only Jack Reacher could take on these bad guys and win. Brilliant!

This title is due for release on October 19, 2010
We'll send you an email as soon as it is available!