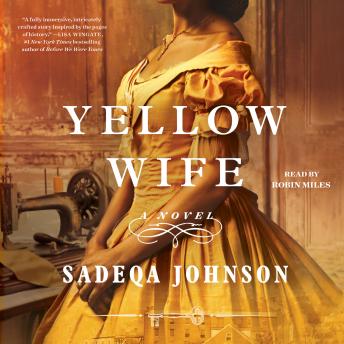 The Yellow Wife: A Novel

Called “wholly engrossing” by New York Times bestselling author Kathleen Grissom, this “fully immersive” (Lisa Wingate, #1 bestselling author of Before We Were Yours) story follows an enslaved woman forced to barter love and freedom while living in the most infamous slave jail in Virginia.

Born on a plantation in Charles City, Virginia, Pheby Delores Brown has lived a relatively sheltered life. Shielded by her mother’s position as the estate’s medicine woman and cherished by the Master’s sister, she is set apart from the others on the plantation, belonging to neither world.

She’d been promised freedom on her eighteenth birthday, but instead of the idyllic life she imagined with her true love, Essex Henry, Pheby is forced to leave the only home she has ever known. She unexpectedly finds herself thrust into the bowels of slavery at the infamous Devil’s Half Acre, a jail in Richmond, Virginia, where the enslaved are broken, tortured, and sold every day. There, Pheby is exposed not just to her Jailer’s cruelty but also to his contradictions. To survive, Pheby will have to outwit him, and she soon faces the ultimate sacrifice.

I truly enjoyed this book. Pheby Dolores Brown was a strong character trying to survive during the time of slavery. I am usually not into books about slavery but this book kept my attention completely. I finished this book in 2 days. Although this is fictional, I loved that there was historical facts used to write this story. I researched the sites after reading. The characters were so real that they made you think about what you would have done if you were in that situation. A must read.

I was pleasantly surprised that I enjoyed this book. It’s very obvious the author did her homework with the historical facts within this literary work. She dealt with a sensitive subject with grace.

This was one of my favorite books. Top 5 of my lifetime. The writing and narrator transports you. This book was heartbreaking at times, but beautiful.

Great book. I recommend it to anyone who wants an accurate assessment of the lives and times of enslaved peoples.