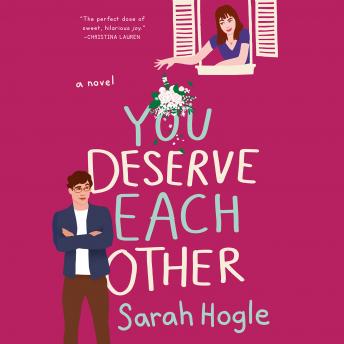 You Deserve Each Other

When your nemesis also happens to be your fiancé, happily ever after becomes a lot more complicated in this wickedly funny, lovers-to-enemies-to-lovers romantic comedy debut.

Naomi Westfield has the perfect fiancé: Nicholas Rose holds doors open for her, remembers her restaurant orders, and comes from the kind of upstanding society family any bride would love to be a part of. They never fight. They’re preparing for their lavish wedding that's three months away. And she is miserably and utterly sick of him.

Naomi wants out, but there's a catch: whoever ends the engagement will have to foot the nonrefundable wedding bill. When Naomi discovers that Nicholas, too, has been feigning contentment, the two of them go head-to-head in a battle of pranks, sabotage, and all-out emotional warfare.

But with the countdown looming to the wedding that may or may not come to pass, Naomi finds her resolve slipping. Because now that they have nothing to lose, they're finally being themselves—and having fun with the last person they expect: each other.

If you’re looking for an alternative love story, this is a good one. It’s a little painful in the beginning because the protagonist is so wrapped up in her self-centered point of view, but watching her evolve and the love unfold is worth the investment IMHO. However, if you’re in the mood for a traditional meet cute and romantic build in the first half, this might not be for you.

Suprisingly good. I highly recommend for a funny romantic read

Very enjoyable. Very slow burn but the pay off was worth it

I found myself laughing out loud several times during this crazy love story. The narrator was terrific!!