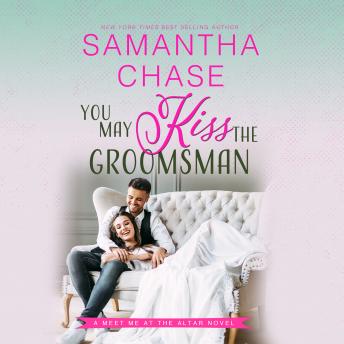 You May Kiss the Groomsman

It seemed like a good idea at the time… When Josie Sullivan agrees to marry her friend Tyler, it’s just so he’ll get a promotion at work. That’s what friends do, right? But what should have been a quick, quiet affair starts to look like the real thing when his family shows up in the middle of the “proposal.” Now, it’s no longer a quick stop at the courthouse during a lunch break but a full-blown wedding, and there’s nothing Josie can do to stop it. There was no way he could hold his peace… Daniel Alexander hasn’t been home in years. After fifteen years as a Navy SEAL, he’s more than ready to return to civilian life. Being away for so long, he’s missed a lot of his younger brother’s life, and it seems like he’s back just in time to stop him from making the biggest mistake of his life. No matter how he breaks it down, something’s just not adding up about this wedding, and he’s determined to figure out why. And he’s not just trying to stop it from happening because he’s finding himself wildly attracted to the bride-to-be... Or because they can’t stop kissing each other. Josie had given up on finding her own happily ever after, and as her attraction to Daniel keeps growing, she’s suddenly regretting her decision to help out a friend. Now she just needs to decide if she wants to kiss the groom…or the groomsman.

This title is due for release on September 9, 2021
We'll send you an email as soon as it is available!