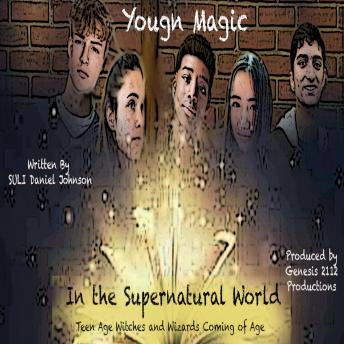 A racially and socially diverse group of teenagers with different magical abilities meet each other and form an unlikely bond. They are challenged by an ancient society run by a warlock from antiquity. He plans to destroy the fabric of society. All other magical orders lack the unity to defeat him. It is left to the young group of teenagers to combine their powers, their wits, and their spirits to confront him.

The underlying message is that diversity is a good thing. The main characters come from a large cross-section of society. They are each in their own ways unique, having their own particular character traits and challenges. I portray them as average teenagers having issues that normally come up at this time in life. They have different upbringings and magical abilities as well as unique histories, yet in many ways, they are the same. They conform to society, yet they are also separate from it. The novel doesn’t focus unnecessarily on sexuality and avoids profane language.

It is an engaging mystery and action novel woven into the fantasy genre. It is written for teens and young adults and brings out the magic of life.

The group practices its own form of magic, and each has its own ideas. They include a magician, a druid, an oracle, a Chinese TCM master, and an illusionist. Each of the characters has its own personal conflicts. Ana struggles with her mother and her obligation to become an oracle. The group struggles together with their specific attractions and differences. They also struggle against a set of evil forces and an ancient sorcerer who desires to change the fabric of reality. Diversity gives them their strength. Together, they become an unstoppable force combining their unique talents and characters. They remain normal teenagers confronting the magic of life and forging bonds. Although it is written for teens and adults, it would not be offensive to children.

This title is due for release on November 15, 2021
We'll send you an email as soon as it is available!